A 59-year-old male with unremarkable past clinical history, presented to the Emergency Department with acute abdominal pain in the left lower quadrant, with a constant, non-irradiating pattern of two days duration. He denied any changes in bowel movements, blood loss, bloating, weight loss or fever. There were no alleviating or aggravating factors. He was afebrile, hemodynamically stable, with abdominal tenderness on palpation of the left lower quadrant but no palpable masses, guarding or rebound. His laboratory tests showed normal hemoglobin, mild elevation of inflammatory markers (leukocyte count 12.000^10/L, CRP 5 mg/dL) and normal liver and renal tests.
A point-of-care ultrasound without bowel preparation was performed in the emergency room that showed an area of sigmoid wall thickening, with echo-poor protrusion from the colonic wall, with surrounding hyperechoic fat stranding, suggestive of acute diverticular disease (Fig. 1). 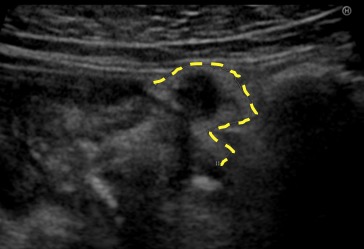 In the same area, we identified a 20mm, hyperechoic, round-shaped, well-circumscribed, polypoid protrusion of the sigmoid wall into the colonic lumen, with no signs of obstruction or intussusception, and absent blood flow on color Doppler sonography (Fig. 2). These findings were indicative of a colonic lipoma. 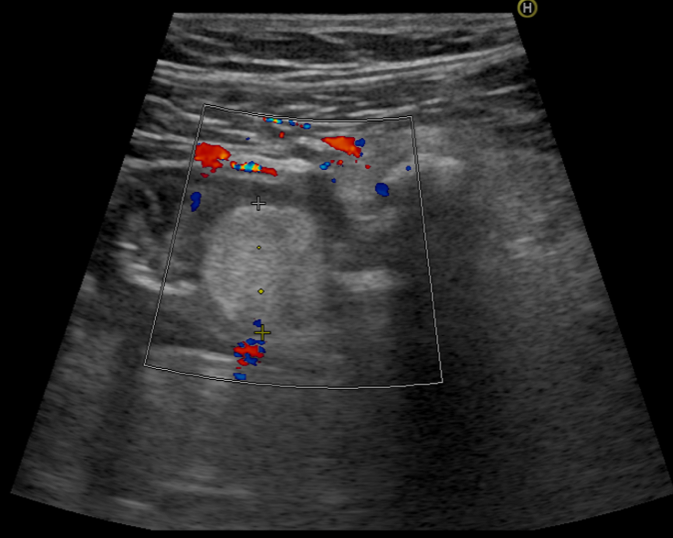 The patient was started on iv antibiotics, with quick clinical and laboratory improvement. He eventually underwent a colonoscopy that confirmed the diagnosis of colonic lipoma and diverticular disease (Fig. 3).
On follow-up, the patient had no further episodes of diverticulitis. 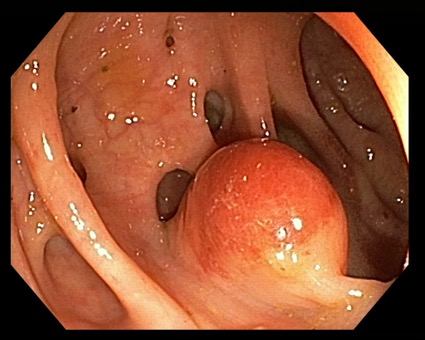 Commentary
As gastroenterologists and other emergency physicians have become more apt at performing point-of care ultrasound, this imaging modality has gained a new role in assessment of patients with acute abdominal pain, since it is safe, inexpensive, widely available and radiation-free. Although CT sensitivity is higher than that of ultrasound (US) in detecting diverticulitis (81% vs. 61%, p = 0.048) in patients presenting with non-specific acute abdominal pain, the positive predictive values were similar . Moreover, the sensitivity of US reaches 90% when there is a high suspicion of diverticulitis .
This case is also peculiar due to the concomitant, primary ultrasonographic diagnosis of a subepithelial colonic lesion, later confirmed by endoscopic imaging, in an atypical turn of events. Since the sonographic aspect of this incidentaloma checked all characterisc of a lipoma, no other diagnostic procedures were deemed necessary.