A 74-year-old man was referred to the Gastroenterology Department under suspicion of pancreatic cancer. He had a previous history of arterial hypertension, dyslipidaemia, prostatectomy for adenocarcinoma, vascular surgery for infra-renal aortic aneurysm repair and retroperitoneal fibrosis with ureteral stents placement. He also had a previous hospital admission, two months prior, for acute pancreatitis without an identified aetiology (without lithiasis or alcohol consumption). He underwent an abdominal computed tomography (CT) which showed a mass in the head of the pancreas (Figure 1). 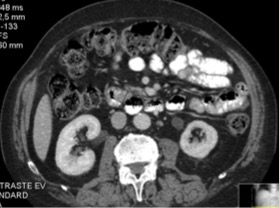 Figure 1. Abdominal CT with a 16mm mass in the head of the pancreas.

For further characterization, the patient underwent an endoscopic ultrasound (EUS), which revealed a diffusely hypoechoic pancreatic parenchyma on body and tail and a hypoechoic area with 24x16mm at the head of the pancreas, as well as a peri-pancreatic and hepatic hilum lymphadenopathy with inflammatory features (Figure 2). Fine-needle aspiration (FNA) with a 22-gauge needle through the duodenal bulb was performed. 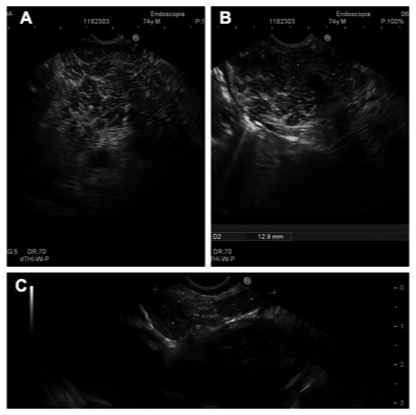 Figure 2. Linear EUS-FNA – A) diffusely hypoechoic pancreatic parenchyma; B) hypoechoic area with 24x16mm at the head of the pancreas; C) hepatic hilum lymphadenopathy with inflammatory features.

The cytological and histological examinations were consistent with chronic pancreatitis with infiltration of IgG4-bearing plasma cells (Figure 3), and, serum IgG4 assay was >6x the upper normal range (1330mg/dL – N: 3-201mg/dL), so the diagnose of type 1 autoimmune pancreatitis was established. The patient started treatment with prednisolone 40 mg/day, with gradual taper after 4 weeks, and clinical, analytical and radiological improvement was observed. 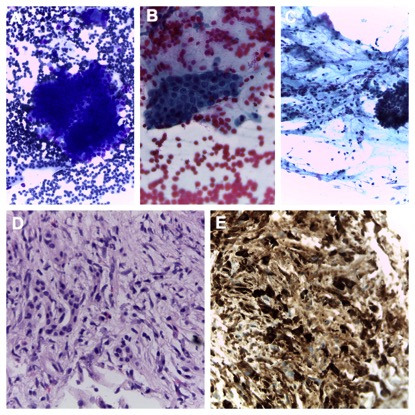 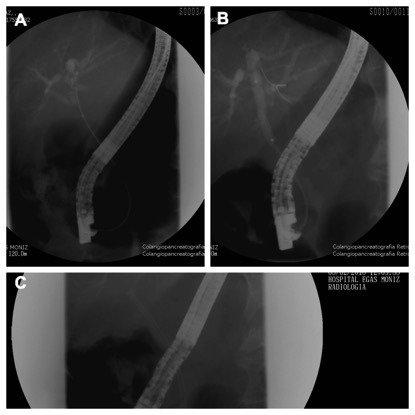 We admitted the diagnosis of IgG4-related disease with pancreatic, biliary, retroperitoneal and aortic involvement (previous aneurism). After cholangitis treatment and screening prior to immunosuppressive therapy, the patient started prednisolone (40 mg/day) and azathioprine (2-2,5mg/Kg/day) with clinical and analytical improvement.

Commentary
IgG4-related disease (IgG4-RD) is an increasingly recognized systemic fibroinflammatory disease with a heterogeneous clinical, laboratory, and histological presentation, affecting a wide range of organ systems. It is characterized by the infiltration of IgG4-bearing plasma cells into affected organs and tissues. The diagnostic approach is complex and should include not only IgG4-related tests (serum levels of IgG4 and immunohistochemical studies) but also an extensive evaluation of the patient’s condition including epidemiological, clinical, laboratory, imaging, and typical pathological features (lymphoplasmacytic infiltrates, storiform fibrosis, and obliterative phlebitis). Serum IgG4 concentration tends to correlate directly with the number of organs involved. The pancreas is among the most commonly affected organ; multiorgan disease can evolve metachronously, adding 1 organ at a time, over months or even years. IgG4-RD is a steroid-responsive disease. Relapses seem to be more common in patients with IgG4-related sclerosing cholangitis. Following relapse, retreatment with glucocorticoids is indicated and the introduction of a steroid-sparing agent should be considered: an immunomodulador (azathioprine or mycophenolate mofetil) or Rituximab.