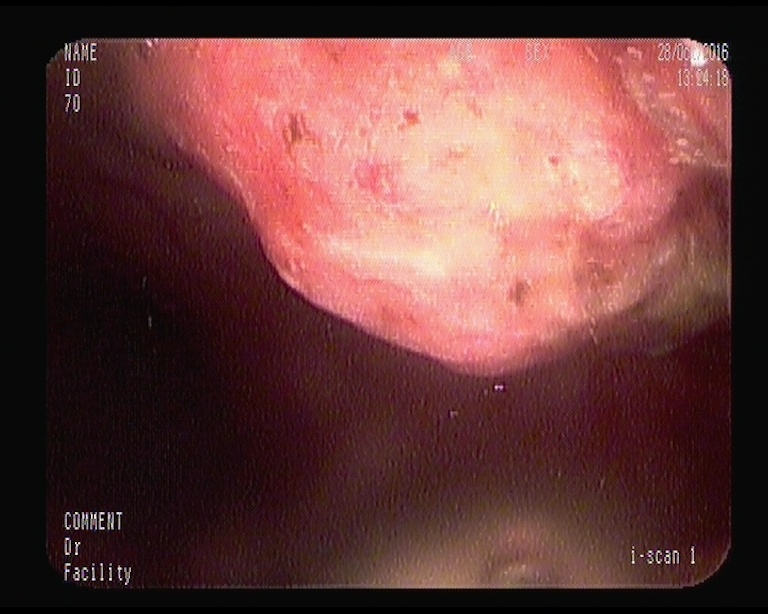 Figure 1 – Irregular and ulcerated lesion with 4-5cm on gastric cardia, extending to the lesser curvature. 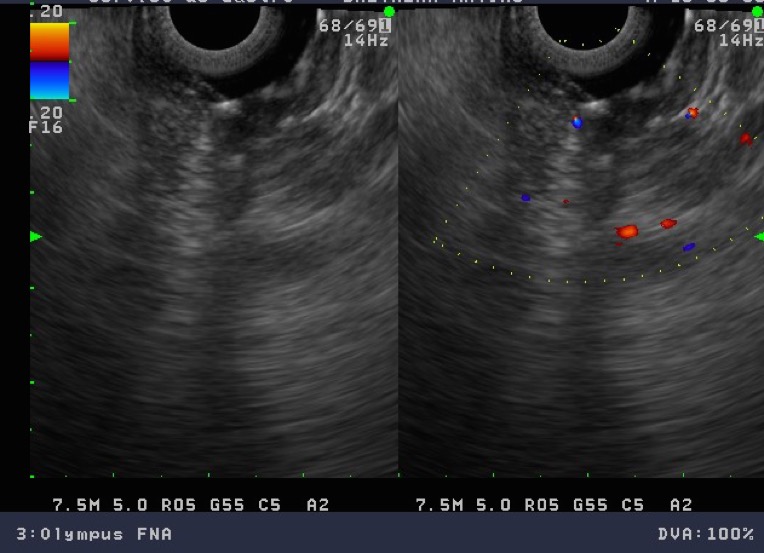 The parenchyma of the left liver lobe was unremarkable. Biopsies confirmed gastric adenocarcinoma (intestinal type, Lauren classification). At this point, the hypotheses of a synchronous cholangiocarcinoma versus a biliary metastasis of the gastric cancer were placed as the cause of the bile duct stricture. An ERCP with direct cholangioscopy (SpyGlass®, Boston Scientific) was then performed. Cholangiography confirmed an irregular stricture of the middle third of the common bile duct with upstream dilation of the biliary tree (Figure 5). Sphincterotomy was done. Cholangioscopy showed a stenotic segment just above the cystic duct insertion, with irregular and friable mucosa with aberrant vessels and biopsies were undertaken (Video). A self-expandable uncovered metal stent 8x60mm was placed (WallFlex®, Boston Scientific) (Figure 6). 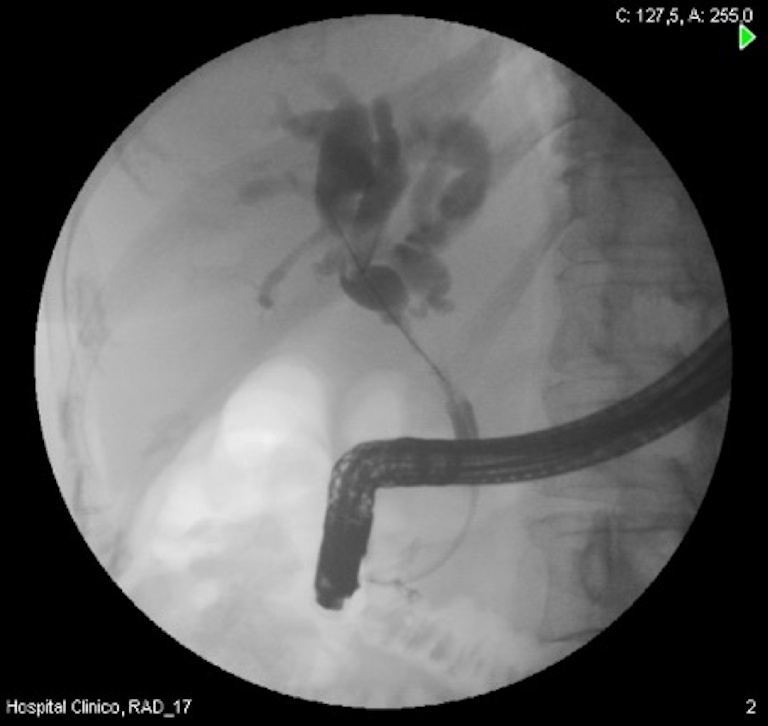 Figure 5 – Cholangiography showing an irregular stricture of the middle third of the common bile duct with upstream dilation of the biliary tree. 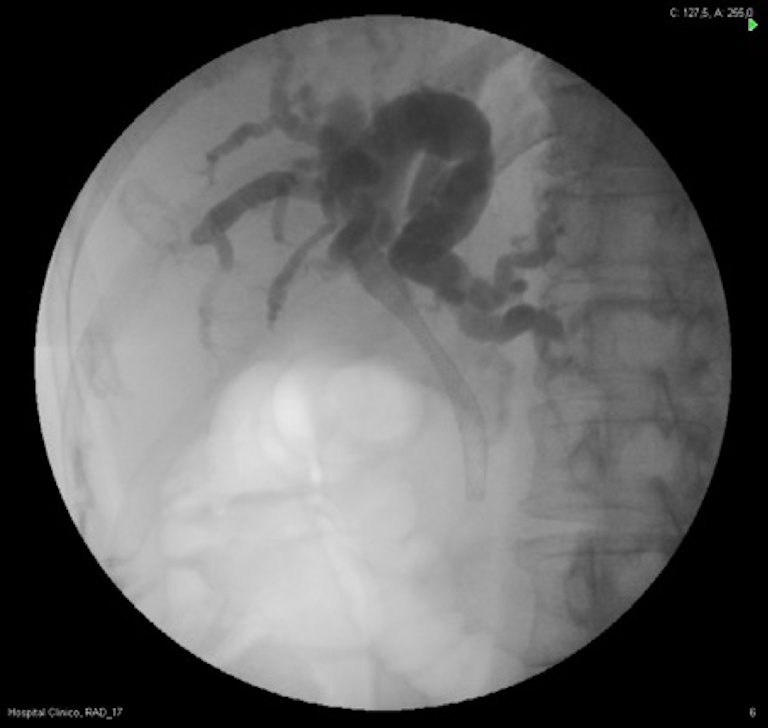 Biopsies revealed adenocarcinoma and the immunohistochemistry study performed on both gastric and biliary stricture biopsies showed positivity for cytokeratin 19 and 20 and for CDX2 (Figures 7A and 7B). CK7 was negative and the proliferative index (Ki67) was high. Thus, a common bile duct metastasis of a gastric adenocarcinoma was diagnosed (M1). 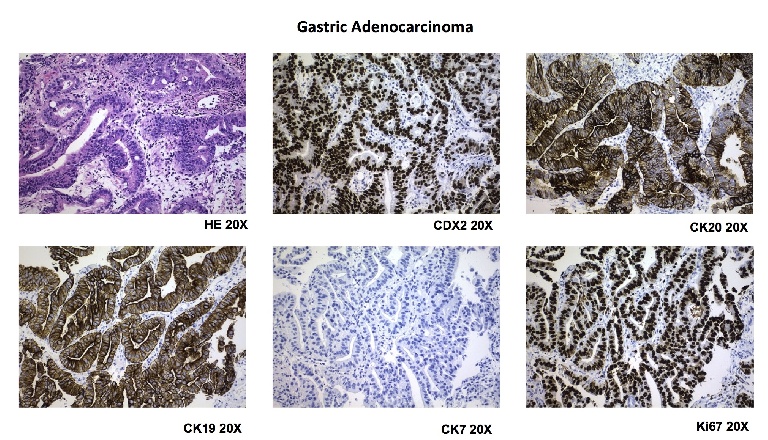 Figure 7A – Imunohistochemistry of gastric biopsies. 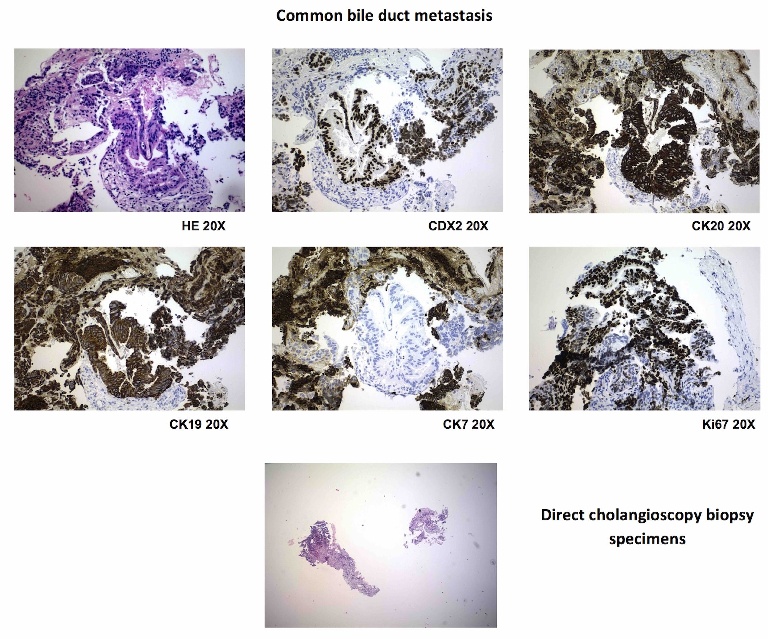 Painless jaundice due to intraductal common bile duct obstruction is far more frequently caused by primary biliary or pancreatic cancer than by metastatic disease.1 Extrinsic obstruction due to malignant lymphadenopathies is also much more common.1 Intraductal common bile duct secondary lesions are extremely rare and have been scarcely characterized in the literature. In the few cases described, it occurred in breast, colon and gastric cancer.2,3 Differential CT features suggestive of intraductal metastasis rather than cholangiocarcinoma were described.4 However, EUS and direct cholangiography are probably more useful exams for this differential diagnosis, as they allow a better characterization of the common bile duct strictures and allow tissue acquisition for cytologic/histopathologic examination. In the present case, EUS was essential not only for the diagnosis and staging of the primary tumor, but also for the identification of this rare type of metastasis. EUS has a well-established role in the study of biliary strictures. However, fine-needle aspiration (FNA) has a lower sensivity in this context, mainly if a mass is not detected at EUS.5 Thus, endoluminal sampling is recommended either as an alternative or in combination to FNA.5 ERCP conventional sampling (intrabiliary forceps and cytology brush) is inferior or at maximum, comparable to FNA.6 Cholangioscopy assumes an important role in those cases in which false negatives were obtained with these two techniques.7 Although the risk of FNA seems exceedingly low, cholagioscopy overtakes the concerns about tumor seeding.5