The authors present the case of a 68 year-old man with chronic alcoholic pancreatitis, who presented to the emergency department for abdominal pain and jaundice. Laboratory tests revealed markedly hyperbilirubinemia and cholestasis. Abdominal ultrasound showed dilatation of the common bile with apparent distal stenosis. Abdominal CT revealed the presence of an 40 mm hypodense cephalopancreatic lesion, with cystic areas, and involvement of the hepatic artery. Adjacent suspicious enlarged lymph nodes were observed. A transendoscopic ultrasonography was then performed confirming the presence of a multiloculated cystic lesion with a solid component (Fig. 1), conditioning dilatation of the common bile duct and Wirsung’s duct (Fig. 2). An EUS-guided fine needle aspiration was done for further characterization (Fig. 3). 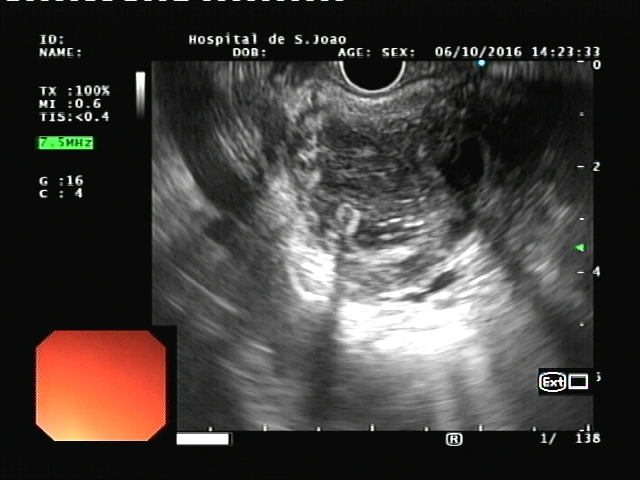 Fig 1. – Pancreatic multiloculated cystic lesion with a solid component, located in the head of the pancreas. 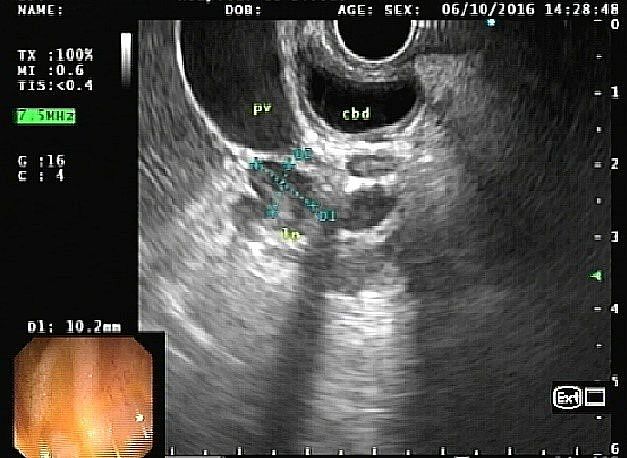 Fig 2. – Dilatation of the common bile duct and Wirsung’s duct. 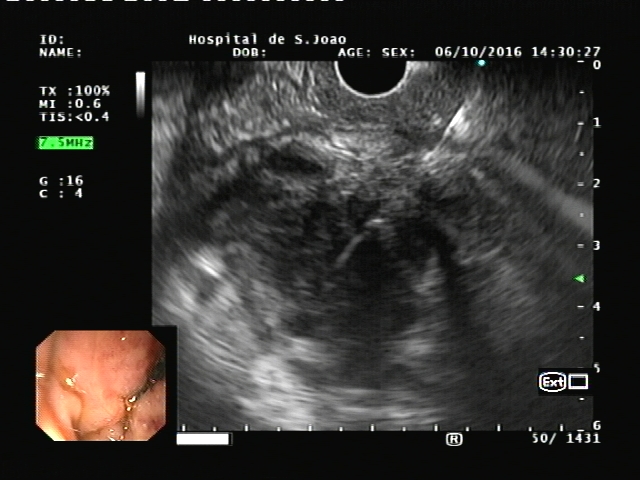 For relief of jaundice it was decided to perform ERCP. With the side-view endoscope a patulous ampulla of Vater with extruding mucus was observed, the so-called fish-mouth sign (Fig. 4), pathognomonic for a main branch intraductal pancreatic mucinous neoplasm (IPMN). Given the invasion of local structures, malignant transformation of the IPMN was assumed, and a short self-expanding metal stent was placed for drainage of the common bile duct (Fig. 5) and allowing neoadjuvant therapy. 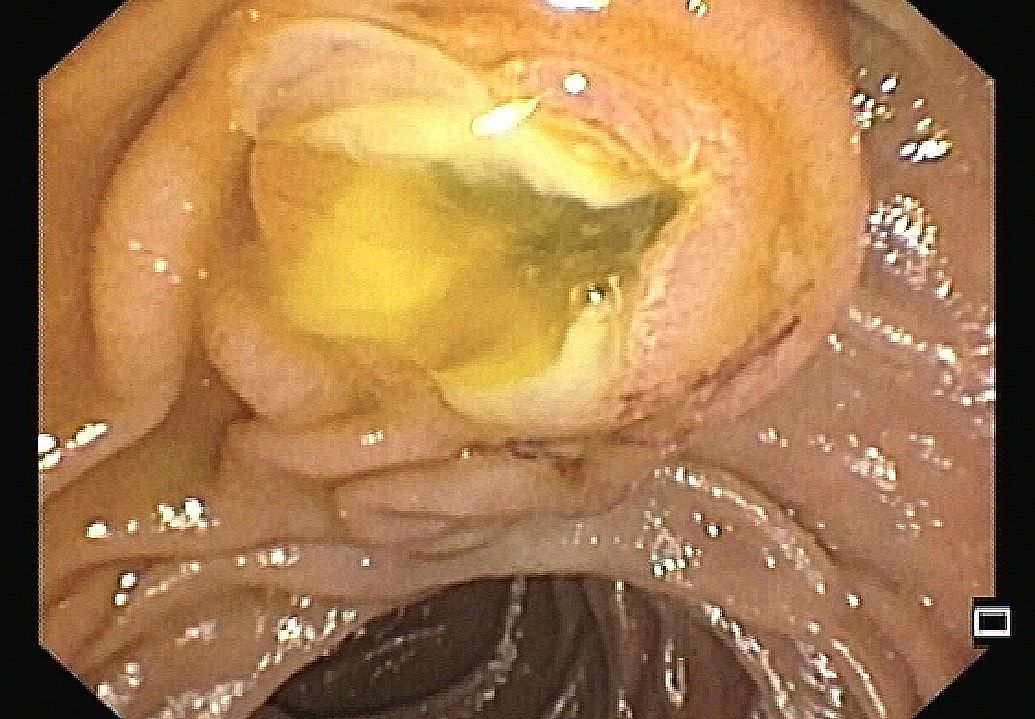 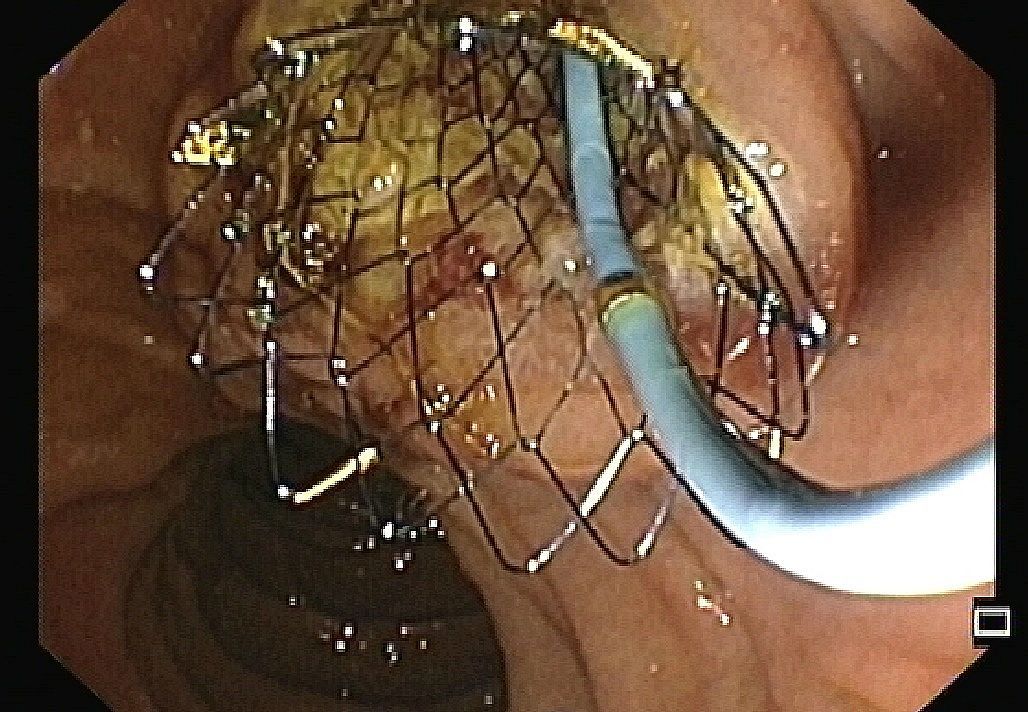 Fig 5. – Self-expanding metal stent was placed for drainage of the common bile duct.

Commentary
IPMNs arise from the main pancreatic duct and/or branch ducts, and are characterized by intraductal papillary proliferation of mucin-producing epithelial cells exhibiting various degrees of dysplasia1. IPMNs have a potential for malignant transformation with a well-described adenoma carcinoma sequence2. Evaluation involves CT or MRI of the abdomen, ERCP and EUS3. Rarely, on endoscopic evaluation, the ampulla of Vater is described as having a pathognomonic “fish-mouth” appearance, which is mucinous material being extruded from the pancreatic duct into the duodenum. It is the high viscosity of this mucinous fluid that obstructs the pancreatic duct and may cause pancreatitis. In this case the lesion had progressed to carcinoma with involvement of adjacent structures.

1. Tanaka M. Thirty years of experience with intraductal papillary mucinous neoplasm of the pancreas: From discovery to international consensus. Digestion. 2014;90(4):265–72.