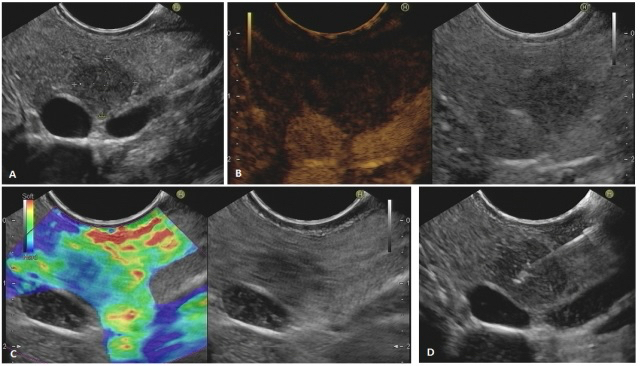 EUS-guided fine needle aspiration (FNA) was performed with a 22-gauge needle (Figure 1D) and cytological analysis was suggestive of pappilary neoplasia (Figure 2A). The abdominal magnetic resonance imaging (MRI) findings were consistent to those of the EUS and no liver lesions were detected. The patient underwent a distal pancreatectomy and the histopathological examination revealed a solid pseudopappilary pancreatic tumor (Figure 2B), positive for vimentine and beta-catenin and negative for chromogranin and synaptophysin on immunohistochemistry.

Figure 2: (A) Clusters of epithelial cells on cytological examination; (B) Solid growth pattern of uniform cells with abundant small vessels on histopathological analysis.

Solid pseudopappilary tumors (SPT) of the pancreas, first described by Frantz in 1959, are uncommon, accounting for 0.17-0.27% of all pancreatic neoplasms1, and represent enigmatic tumors which etiology, prognosis and natural history are unknown. Pancreatic SPT primarily affects young females with a reported mean age between 25 and 38 years2. These tumors can be found anywhere in the pancreas as an incidental finding or present with a non specific clinical picture, including abdominal pain, pancreatitis, jaundice or a palpable mass. Most of pancreatic SPT exhibit a benign behavior. In 85% of cases, the tumor only interests the pancreas, while the others 15% may present peritoneal, liver, lymph nodes, spleen and colon metastasis. EUS or MRI, typically reveal a well-circumscribed and heterogeneous mass with varying solid and cystic components, generally demarcated by a peripheral capsule and occasional calcifications. The key histological hallmarks of SPT are solid and pseudopapillary proliferation of monomorphous cells without increased mitosis or cytological atypia3. Immunohistochemically, SPT include positive staining for beta-catenin, vimentin, progresterone receptor, CD56, neuron-specific enolase, CD10, cyclin D1 and, more recently, negative membranous E-cadherin4. Surgical ressection is the treatment of choice, and its prognosis is excelent, with a overall 5-year survival close to 97%.