A 53 year-old female with complaints of vague upper left abdominal pain for one year was referred to our hospital. There was a personal history of breast cancer and she had undergone partial mastectomy followed by radiochemotherapy.

EUS identified a voluminous pancreatic cystic lesion with internal septations, fully involving the pancreatic gland, formed of non pure content. The larger loca were in the cephalic/istmus region and the distal pancreatic segments presented a microcystic pattern. It was not possible to document a relationship with the pancreatic duct, given the size of the lesion. 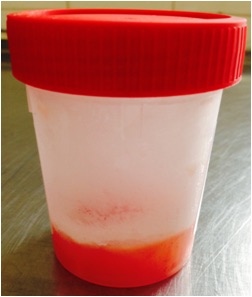 Lymphangioma is a benign tumor of the lymphatic vessels. Its etiology remains unclear; a well established theory suggests that lymphangiomas arise from sequestrations of lymphatic tissue during embryologic development. However, it has been suggested that abdominal trauma, lymphatic obstruction, inflammatory process, surgery or radiation therapy may lead to the secondary formation of such a tumour (1). Lymphangiomas of the pancreas are extremely rare, accounting for less than 1% of this type of tumor (2). There are no specific blood markers to confirm the diagnosis of lymphangioma of the pancreas; moreover, radiological imaging (US, CT, MRI) often are not able to perform a correct preoperative diagnosis (3,4). EUS can depict the internal details of a cystic pancreatic lesion in great detail, and also be used to aspirate the lesion for diagnostic studies.