A 76 years-old man was admitted to our Department with an acute epigastric pain. He had a medical history of hypertension, hyperlipidemia and diabetes. Physical examination was unremarkable with the exception of pallor. Laboratory tests demonstrated a normocytic and normochromic anemia, increased aminotransferases (ALT 277 UI/L and AST 60 UI/L) and gammaglutamyltranspeptidase (GGT 356 UI/L). Contrast-enhanced abdominal computerized tomography (CT) revealed a nodular and hypodense formation with 60mm located in the hepatic hilum region, without a cleavage plane with the large gastric curvature. Endoscopic ultrasound (EUS) showed a spherical heterogeneous mass, with 60mm of greater diameter, containing echogenic liquid material inside corresponding to necrosis limited by a well-defined and thickened wall, located in the upper large gastric curvature, fourth layer (muscularis externa), between the left liver lobe and the pancreatic body (figure 1). The study was complemented with intravenous contrast injection (sonovue®) that confirmed a hypervascularized lesion (figure 2). Enlarged lymph nodes were not identified. These findings were consistent with a giant gastrointestinal stromal tumor (GIST) with central necrosis. 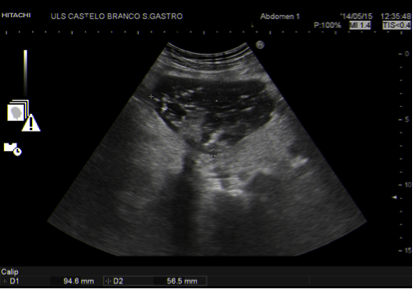 The patient underwent a total gastrectomy and the histopathology showed a spindle-cell tumor positive for vimentin, CD 34 and CD 117. These findings confirmed the diagnosis of gastrointestinal stromal tumor.

GISTs are the most common mesenchymal tumors of the gastrointestinal tract, located in the stomach in 40-60% of the cases. They are subepithelial lesions that develop in the dependence of the muscularis mucosae or muscularis externa and are thought to arise from interstitial cells of Cajal. In about 95% of the cases, they express receptor c-kit/CD117, a feature that allows differentiation from other mesenchymal tumors. Although the natural history of these tumors is not well defined, any GIST should be considered as having malignant potential, depending on some prognostic factors, such as the size and mitotic index (Fletcher classification). Endoscopic ultrasound plays a key role in the assessment of subepithelial lesions by its characterization and performance of fine needle aspiration (FNA) and/or biopsy when needed. Several studies have demonstrated some predictive malignant characteristics of GISTs, suggesting that lesions with more than 3 cm, heterogeneous, with irregular contours and cystic areas (which correspond to extensive areas of necrosis) have a more aggressive behavior. The case of this patient is illustrative of the role of EUS in the evaluation of the morphology and local staging of these lesions, sometimes complemented by doppler study, elastography and/or ultrasound contrast agents.