After two unsuccessful attempts of biliary cannulation through Endoscopic Retrograde Cholangiopancreatography (ERCP), even after pre-cut, the rendez-vous technique was considered.

EUS and the rendez-vous technique
EUS identified a 20mm dilatation of the CBD, followed by an abrupt peri-ampullar stop caused by a 12mm hypoecoid lesion (Figure 2A and 2B). EUS-guided anterograde CBD canulation was achieved using a 19G needle (Cook ® Echotip ultra HD-A) through the second portion of the duodenum, proximal to the ampulla. A 0,035mm guide-wire was then placed in the CBD and inserted in the duodenum anterogradly (Figure 2C). 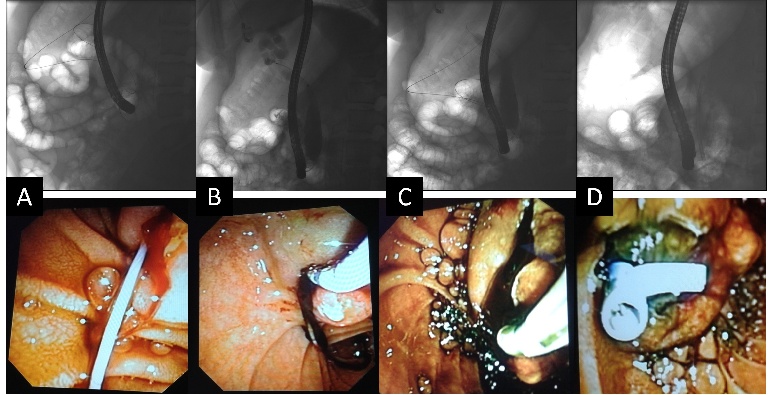 Figure 3. A. EUS-guided placement of the guide-wire in the CBD; B. Biliary canulation by ERCP;

Conventional biopsies were compatible with Adenocarcinoma of the Ampulla.

Commentary
In patients with obstructive jaundice in which ERCP is unsuccessful, Endoscopic Ultrasound-guided Biliary Drainage (EUS-BD) is a less invasive technique when compared to the alternative approaches, namely Percutaneous Trans-hepatic Biliary Drainage (PTBD) or surgical procedures. Successful biliary drainage using this approach is attained in 73 to 97% of cases, allowing a physiological drainage with lower complication rates, using a single procedure 1-3.
The approach to the biliary tree can be achieved through the duodenum, with direct access to the CBD, or through the stomach, with access to the left hepatic duct 2, 3. EUS-BD can be divided into three different techniques: EUS-rendez-vous technique; EUS-guided transluminal biliary drainage; EUS-guided anterograde approach 1, 4.
Reported complications for these techniques vary from 4 to 21%, with pneumoperitoneum and biliary leak being the most frequent. The rendez-vous technique shows lower complication rates, when compared with the others approaches, probably because of its more physiological drainage2.
In this case, the redez-vous technique allowed the CBD drainage and the diagnosis of a peri-ampulary lesion. The use of a 19G needle was feasible and safe, allowing the insertion of a 0,035mm guide-wire. With its safe and minimally invasive profile, this technique is becoming the first-line approach when ERCP is unsuccessful.