An 81-years-old man with medical history of constipation and normocytic anemia presented in our department with severe weight loss over a 2 month period, without any evidence of gastrointestinal bleeding. Transabdominal ultrasound of the gastrointestinal tract was performed, without previous bowel preparation, revealing a large solid heterogeneous mass within the lumen of the descending colon, isoechogenic to the muscularis propria, measuring approximately 20 mm of longest diameter. On colour Doppler, the lesion showed predominantly central vascularity, compatible with a vascularized pedicle (Figure 1). 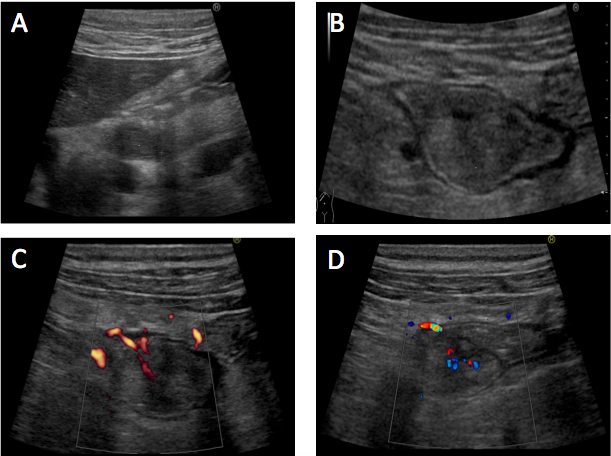 A total colonoscopy revealed at the descending colon, with poor viewing area, an irregular and protruded sessile lesion with 25 mm (0-Is in Paris Classification), occupying two thirds of the circumference of the lumen (Figure 3). Biopsy confirmed tubulovillous adenoma with high-grade dysplasia.

The patient had previously performed a computed tomography (CT) in an external institution which showed an increased number of celiac, mesenteric, aortic, lumbar and iliac lymph nodes. The multidisciplinary assessment team decided for a surgical approach.

Technological advances combined with the physician performing experience have broadened the usefulness and application of ultrasonography examination of the gastrointestinal tract, specially in the evaluation of bowel wall diseases. Abdominal ultrasound (US) has become an essential part of intra-abdominal pathology evaluation, even before the patient presents signs and symptoms suggesting abdominal disease. Due to its low cost, low risk and wide availability associated with its considerable diagnostic accuracy, US is an effective tool to complement physical examination.

In experienced hands, ultrasound can demonstrate a high percentage of colonic large tumour lesions. Polyps are only demonstrable in a minority of cases and may not be reliably detected on conventional transabdominal ultrasonography. However, hydrocolonic ultrasound (ultrasonography evaluation of the colon following water enema) has a high degree of accuracy in detecting such lesions and have been proposed as an alternative for imaging of the colon and colonic wall. Doppler ultrasound allows evaluation of bowel wall vascularity and is mainly used to estimate the perfusion of bowel abnormalities, narrowing the differential diagnosis.

As in our case, the most common ultrasonographic appearance of a polyp is an intraluminal heterogeneous mass with central axis vascularization.

5. Macheiner P, et all. Tumours of the large bowel and rectum: possibilities and limitations of sonographic evaluation. Ultraschall in Med 2007; 28: 1-6.